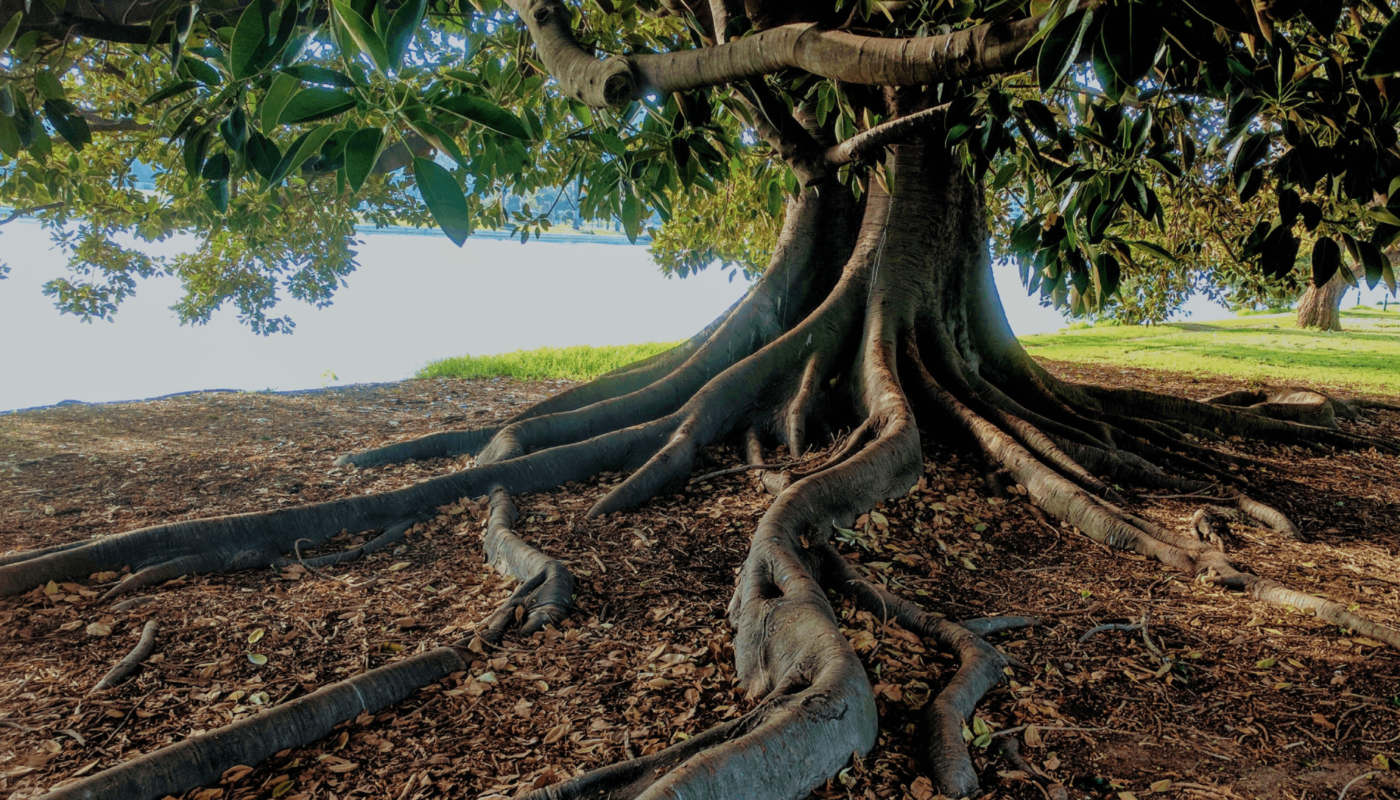 If you care about your personal data and preferences (and you get more and more worried with every data leak out there), like your official identification documents, social security or health insurance numbers, you probably encountered a few situations where you questioned if the service you're going to consume or subscribe to really needs all that information. What does it do with your data, you may ask? Why does the drug store ask you for key information that may strongly relate you as an individual with the meds you are taking? Can this data be used by your health insurance to try and charge you more next year? Or maybe, if you wish to prove that you have what it takes to get a loan, you have a good credit score and the income, but you don't want to share your means of living? I suppose you pay your taxes and the government probably knows exactly what you do, so why expose yourself again to a private company that nobody knows where it stores your data or what it does with it?

Trust is really important in business, but we have no idea who is handling and manipulating our private information. That happens with, or even without our knowledge, as we have signed it away and agreed with it by accepting the terms of use of that service. They are often too long with difficult words, and not everyone has the base knowledge needed to read it. The concepts I’m going to show you are not new, but they are now very viable and becoming of great importance nowadays.

What is Zero Knowledge Proof

Also known as ZKP, this was first conceived in a paper in 1985 [1] and it is a cryptographic method to prove that Person A has the information required by Person B, but without revealing said information or who is Person A to Person B.There are plenty of algorithms that implement this concept of ZKP, each for a kind of proof. Between them, there are two huge groups: the non-interactive and the interactive ZKP.

There are a few classic examples that give shape at a very high level of proving something without telling what the truth is.

Another couple of pretty cool examples, all involving cryptography, are the ones that allow you to provide a company with your personal information without actually giving it to them. Of course they need to allow you to do so, by integrating their systems and services to this privacy measure. For instance, ING, the dutch bank, proposed an algorithm that allows clients to prove that their salaries are within a range (Zero Knowledge Range Proof), or either they are included in some set of allowances (Zero Knowledge Set Proof) [2]. They even wrote some code in Go so we can see some examples [3].

One of the most straightforward ways of implementing non-interactive ZKP is making a representation of a set, to be checked later if it contains part of the required information. We're going to take a quick look at a way of implementing a Merkle Tree and make it hide information.

Merkle Trees are binary trees that digest information that sits on their leaves, hashing each pair until it outputs one single hash, called Root [4]. 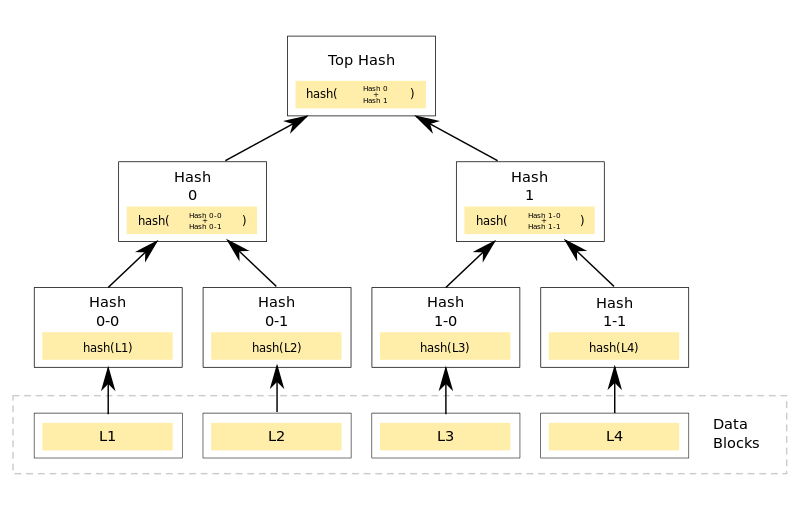 But if we want to have a single hash to represent all the data at the input, we could simply hash (L1, L2, L3, L4), right? Well, it depends. Many sources of file sharing provide you with the digest hash of the file or even the checksum, so you can prove that the file you downloaded for hours is really the file you wanted. Here we are presented with the first problem: we need to have the whole file before checking it. So, this is where the Merkle Trees shines. Assuming we want to download something that is divided into many parts, and perhaps each part is hosted by a different source, we can be extra-paranoid and check if each of the downloaded parts is really part of the whole file you’re downloading. And then maybe if each file hoster is part of a distributed network, why not kick him out (or at least ignore him) if he is providing bad blocks of data?

The trick here is that Merkle Trees allow us to check if something is part of a whole and makes checking them easier for the computer to process, since there is less data to hash. But for both cases, the checksum of the entire file and the Merkle Proof of the tree of blocks need to be provided by a trusted source, like the entity that originally made the data available. They’ll initially publish something like “we’re providing this download divided into 256 parts across a file sharing network, and the root hash is 0xb123abc…In case you need to check if your downloaded part is really part of the full download, send us the number of the file and we’ll send you the path that generates the root hash”. Of course this process will probably be managed by a program, you don’t need to calculate it by hand.

To verify if something is a part of the tree, we’ll need to get a few hashes from the trusted provider. The number of hashes needed is described as the log2(N), being N the number of original leaves. 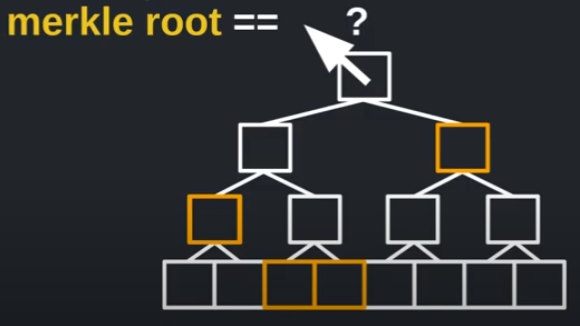 In the above example, if we want to check if Block 3 or 4 (counting the first block as Block 1) are a part of the tree, and we are sent 3 hashes, we’ll estimate the original tree as having (2³) 8 blocks of information. If we already know that there were originally 8 blocks, we’ll expect to receive (log2(8)) 3 hashes. The fourth hash is the one we have and want to check if it is part of the tree.

Gently borrowed from Belavadi Prahalad on his Medium Article [6]

One drawback is exemplified in an anecdote about three bakers that knew a cookie recipe. Each one of them are nodes of a network that can make those cookies and prove they still know the recipe to other members of the network. No one else knows the recipe, but everyone can send them cookies and they’ll tell if it was made by one of them. The problem happens when they age and die, burying the recipe with them, and all that remains is the knowledge of a secret recipe, and perhaps some cookies (the result of the secret), but no one else can tell when a new cookie appears if it was made by the original bakers. The secret itself is lost forever. [7]

That’s why it's good to keep the source that generated the tree referenced somewhere, because the hash registered on blockchain is useless if no one knows what it stands for.

In this article, we went through the initial steps and concepts of applying a technique to hide information from people that do not need to know it. We had a general idea of how it is possible to give just enough information to someone, to prove if the claimer is who it claims to be. All that in high level examples, with a pinch of Merkle Tree building. In the next article, I’ll show some code implementation and practical examples.

Watch out for your test case values: detecting code changes 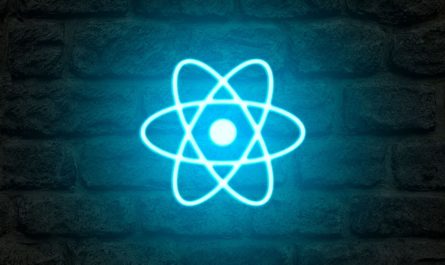 This is a step by step guide to create, update and test ActiveRecord models. For detailed information please refer to Rails Guides.